In this thoughtful and groundbreaking book, written in the context of the post-apartheid era, the author examines recurring themes of land, landscape, politics, race and violence in the twentieth-century South Africa. She examines these through their representation in many different forms: physical sites and monuments, events and commemorations, newspapers, magazines, tourist brochures, literature, oral histories, political writings and legislation. She draws evidence from photographs, maps, aerial photographs, magazine covers and advertisements, architects’ drawings and models to develop a complex understanding of the meaning of landscape in contemporary South Africa.

The book explores the enlargement of two themes. The first is that of land as soil, as earth, as site of the sensory experience of nature, invested with meaning both personal and national, the second is that of landscape as medium of political elaboration, racial division, violence and conflict. This landscape is neither natural nor neutral, but one that is imagined, represented and actively transformed by politics. Between the two images- land as site of sensory renewal and land as politics- oscillation and contamination occur, producing the tense, uncertain and contradictory meanings still alive in South Africa today.

The book is divided into five sections. The first two, entitled ‘Veld’ and ‘Farm’, examine what South African author J.M. Coetzee has called the two ‘dream topographies’ by which Dutch settlers constructed a natural and inalienable right to the land of Southern Africa. ‘Veld’, an Afrikaans word from the Dutch for field, country or countryside, invented a landscape both impenetrable and vacant, an empty space awaiting habitation, its indigenous people part of nature. ‘Farm’established the closeness of the settler to the land through his capacity to farm it, to transform wilderness into garden, and in which an isolated, patriarchal life could be lived. Debates and conflict about race, identity, ownership and social relationships are still embedded in these two apparently innocent forms, as investigated for instance in Jonny Steinberg’s book on farm murders in KwaZulu-Natal in the 1990s.

The third section of the book, ‘Native Lands’, explores the close coupling of land and identity mobilised by the apartheid government (1948-1994) to construct blackness as sign of both primitiveness and inferiority. One of its primary instruments, the ethnically determined, rural, fragmented bantustan or homeland, in demarcating constricted areas of land for habitation by black South Africans, aimed at freezing black identity in a primitive past, outside of historical time or modernity, which has held the preserve of whites. Its other instrument, the Group Areas Act of 1955, attempted to construct urban space and life as dual landscapes, hiding black urbanity in homogenous enclaves. This is explored in the fourth section of the book, ‘Invisible Landscapes’, which focusing on Johannesburg, untangles mythical images of the land and those of the segregated city by contrasting representations of the city in popular Afrikaner and Black publications. While the former represented it as a shining vision of modern industrial power arising from an empty veld, the latter exposed its violent underbelly, extending, literally, under the earth into the mineral-bearing rock in which black labour toiled. Invisibility, silence and omission are exposed as operative political practices in the formation and maintaining of this dual, but parallel landscape.

The final section of the book, ‘Erasures’, takes these ideas about abscencing and presencing as political practice further. Focusing on Sophiatown in Johannesburg and District Six in Cape Town, the author examines the politics of forced removals enacted during the apartheid years as sites of racial violence and contested meaning, and as imaginary landscapes for the reclamation of land in the post-apartheid period. That alternative political histories of landscape are being made around sites of resistance to removal embeds violence and damage in contemporary representations and reconstructions.

The author concludes by arguing that what is at stake in the transformation of South Africa is not only the physical form of the land and its inhabitation- how it should be inhabited, who should inhabit it, how cities should be planned, how land should be redistributed and houses built, etc.- but also how it is imagined and represented. ‘Landscape’, she argues, ‘emerges at the end of the apartheid period as mutating representation, or series of representations, which conflict, challenge and contradict one another’ (p.273). It is complicated by different claims on ownership, by what is present and what is absent, by contradictions between physical place, memory and imagination. At best it can be understood as a ‘hybrid representation, the meaning of which is inseparable from ambiguity and uncertainty’ (p. 273). The author examines instances where landscape is being transformed by overlaying different occupations and imaginations on the land, as, for instance, in the process of land restitution and in the District Six Museum in Cape Town, hypothesising about what a different, more inclusive vision of the land could contribute to South Africa’s future. This is echoed by Albie Sachs, Justice of the Constitutional Court of South Africa, in his introduction to the book. Sachs describes his daily experience of arriving at his chambers in the new Constitutional Court building in Johannesburg: ‘I don’t feel I am a white man in a white area, or a white man in a black area. At last, I say, I am just a person going to work in a zone of South Africa that is both historically and imaginatively free’ (p. x).

While the majority of studies of South Africa in the past have emphasised its political or social history, this book contributes to an emerging scholarship of critical writing on the nature of space, representation, memory and identity after apartheid: as such, it is of interest to more than just scholars of that country. Those interested more generally in themes of land, landscape, politics, race and violence, as well as those engaged in the reconstruction of societies torn apart by violence and conflict, will find that its critique of their contemporary and historical inter-weavings in the South African context has great resonance. 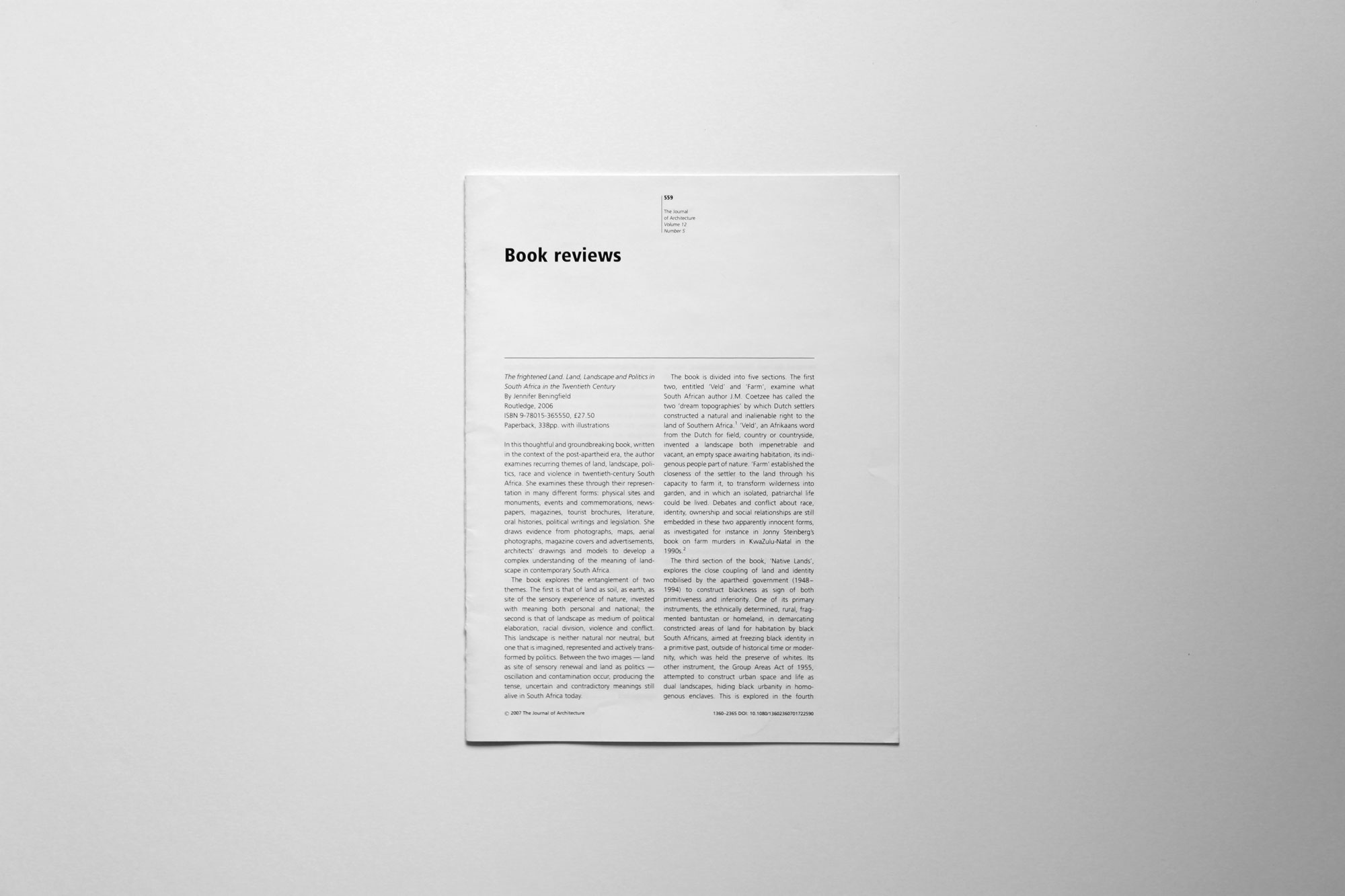